Happy Friday everyone! I hope you all had a great week, whether you were off for the vacation week or working away (I myself was working, although we had Monday off for the holiday). I thought it would be fun to drop on in here and let you know how life was going for this “Bliss”-ful family. 🙂

What can I say about this little bundle of joy that continues to brighten our day? She is turning 10 months tomorrow and has been growing by leaps and bounds.

Health: She is in the 80th percentile for height (!) and weighs just around 20 pounds. She’s long and lean, and the doctor said that she’s very healthy. Aside from her ear infection in October, we’ve been very lucky that she hasn’t had any major health problems. With the flu kicking around, we certainly wanted to make sure she wasn’t compromised. We took her out in public, but made sure that strangers didn’t touch her (you wouldn’t believe how many people just try and touch her cheeks without asking!) and that we had plenty of disinfectant, if needed. So far, so good. 🙂 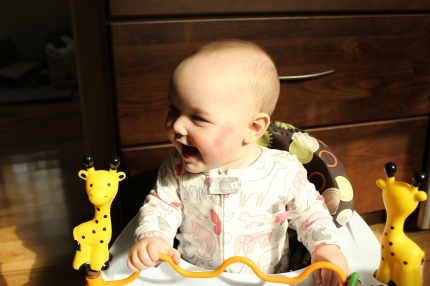 Growth: Her latest development is that she’s been pulling herself up on everything and standing for long periods of time. She’s still unsure about taking steps and hasn’t quite mastered being able to fall on her butt, but she’s making great progress! And I love the determination in her voice when she’s trying to climb up our legs or on the couch. She’s so stinkin’ cute!

Food: Regarding eating, she’s still drinking formula for her nutrition, and we’ve begun to introduce new foods to her. So far she’s tried green beans, carrots, sweet potatoes, broccoli, zucchini, pears, peaches, apples, bananas, strawberries, sweet peas, chicken, ground beef, pinto beans, kidney beans, peanut butter, Cheerios. She’s been pretty indifferent to everything, though, as she is still getting used to the taste and texture. She doesn’t really seem to love or hate anything.

Sleep: We have been so extremely lucky that she is still sleeping through the night. She go down around 8PM and gets up anywhere from 5:30AM to 7AM (depending on if it’s during the week or on the weekend). She really just gets up when we start making noise in the kitchen. I love seeing her smiling face over the side of the crib, ’cause you know, she can stand in it now! 🙂

My job is going wonderfully! I’ve been here for three months now and I love coming in every day. It’s still weird working for a hotel, and having no guests, though. Right now things are still pretty steady but they will start to ramp up as we continue to hire people.

He’s been working away at his YouTube channel and website, and he’s been doing really well with it! If you’re interested in learning how to make energy efficient upgrades to your home, make sure to check out DavidPoz! And it’s been a blessing that he’s been able to stay at home to watch Eleanor. He shows me pictures and videos from throughout the day, to see what they’ve been up to. I can tell that they are going to have a great relationship. 🙂

-For the month of January, we had an exorbitant grocery bill (we went to Costco a few times to stock up on formula), so we were determined to get that reduced moving forward. We’ve found a system of getting shelf items from Aldi (at the beginning of the month) and fresh items from Market Basket (once a week), and since doing that we’ve cut the bill in half! Hopefully we can keep the momentum going.

-The weather has been all over the place out here in New England! This past Wednesday was nearly 80°, and then yesterday we were in the 30s, with snow. But the sunrise and snow this morning was breathtaking!

-I am so excited this year, because David and I have two weddings we’re attending (his cousin in April, in Texas; my cousin in October, in Maine), a baby shower (my other cousin), and a bridal shower (for the wedding in October). There’s going to be a lot of celebrating in 2018! 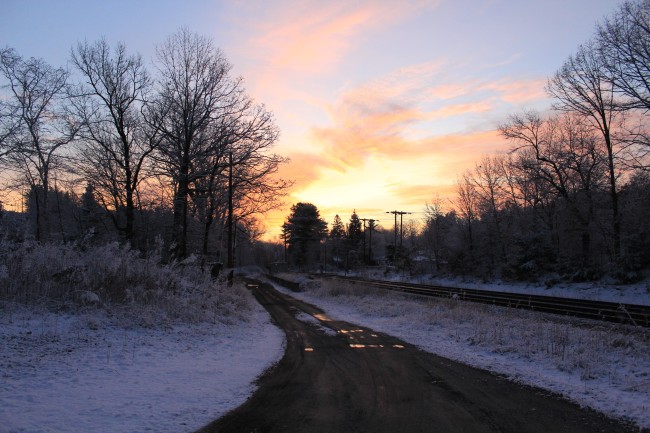 And I think that’s it from here! Like I’ve mentioned on my last post, and in Instagram, I’m really getting the hang of my camera and I love seeing the pictures that I can create! I expect a lot more updates here, with maybe a few recipes thrown in. 🙂

What’s been going on in your life??

Before and after. 😆 Another successful Christmas. 🎄🎅
"I'm keeping my eye on you old man." 😂
Festival of Trees in Leominster! Beautiful displays. 🎄🎄