It’s just one of those days where I think a list would be a lot of fun! Friday is here, and it’s National Doughnut Day! I certainly celebrated. 😉 Stolen from Janae’s site! 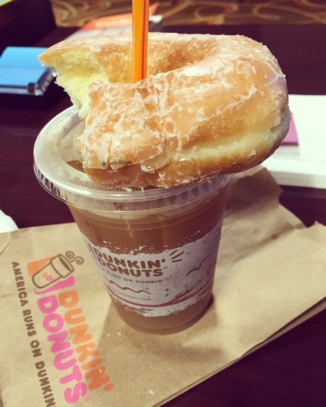 4. Swam in an ocean– Yes (although I prefer the lake)

5. Gone on a blind date– Not really a blind “date”, but I’ve been blind “let me introduce you to my friend who I think you might like.” They never worked out.

6. Skipped school– In college, my friend Kristal and I skipped a day of classes to watch our friends play whiffleball at Fenway Park. Best decision ever!

7. Watched someone give birth– No

8. Been to Canada– Yes. I really want to go back to Quebec City, and visit Vancouver for the first time.

10. Been to Europe– Yes; Ireland (best country ever!), Spain, France, Switzerland. Ireland and Spain were with school; France and Switzerland were on my own. 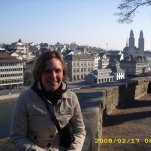 11. Been to Las Vegas– Twice. Both times I’ve stayed at the Paris. I love that hotel!

12. Been to Washington D.C.- Couple of times; once with school and more recently with David.

14. Visited Florida– Yes, my grandfather lives on the west coast

15. Visited Mexico– Yes, as a community service with Endicott

16. Seen the Grand Canyon in person– No, but it continues to be on my bucket list!

18. Been on a cruise– Not yet, but I think we’re planning on one in the near future

19. Served on a jury– Almost; got called for duty but didn’t stay

20. Been in a movie– No, but I have the connections to hopefully make that one come true!

21. Been to Los Angeles– Yes, my aunt and uncle live just north of the city

23. Played in a band– High school band; I played the trumpet because I’m cool like that

25. Made prank phone calls– All the time when I was younger…uh, I mean no, of course not

26. Laughed so much you cried– Yes and it’s the best feeling ever

27. Caught a snowflake on your tongue– Yes

29. Had a pet– Hamster, guinea pig and rabbit (not all at the same time though)

33. Been water skiing– No, water tubing though!

36. Been to a drive-in movie– Yes, my hometown has the best one ever!

40. Stayed in hospital- Not stayed, but been to a hospital when I sprained my ankle

46. Been scuba diving– Yes…although I would say snorkeling instead, in Mexico

47. Lived on your own- Not really; it was either with my parents, with David, or with his sister

Hope you all have a wonderful weekend! Feel free to add in your own bucket list in the comments! 🙂

Unfiltered and all natural. All too often I only show my face if I'm either having a great skin day or if my hair and make-up are done.
A gorgeous Saturday to be out with the family. And Lincoln's first time apple picking. This kid loves his apples. ❤️💚🍎
A rainy day couldn't keep us away from visiting Strawbery Banke. I love visiting old houses, and I think the kids enjoyed themselves too.
Another hike for the books! We hiked about 8 miles round trip up and down Mt. Moosilauke in New Hampshire. It took us 5 hours and luckily the terrain was steady but not hard. The weather was also perfect: warm, breezy and sunny. 🌞⛰️